Back in November, we wrote about our Single Origin Coffee Stout, Full of Beans. At the time of writing, we had just struck up a relationship with local roaster Yurtesh from Lincoln Coffee House (Twyford), with an aim to introduce fair and direct trade, single origin beans into the recipe. 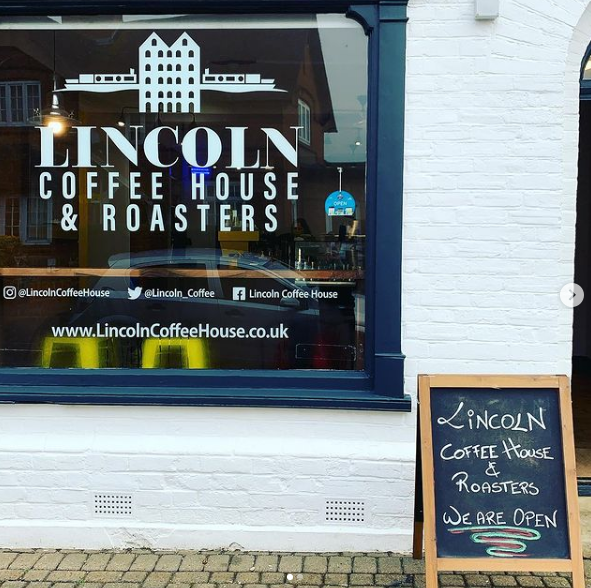 Six months later and Full of Beans is going strong in our core range and tasting better than ever, so now we’d like to take a step inside the roastery, documenting the process all the way from bean to beer!

As you may expect, a coffee roastery in operation is a such wealth of sensory stimulation, much like a brewery can be on a brew day. The sight, sound and smell of the process in action makes the whole experience intoxicating, without needing a single drop of beer.

Visually, you’re struck by the presence of the roasting machine; clad in stainless steel and dominating the room. Yurtesh is studiously following the telemetry on his computer, monitoring time and temperature but also the more hard to pin down factors – he constantly takes samples from the drum, assessing the smell, taste and colour of the beans in progress. Leaning patiently against the wall are sacks of unroasted ‘green’ beans from all over the globe. 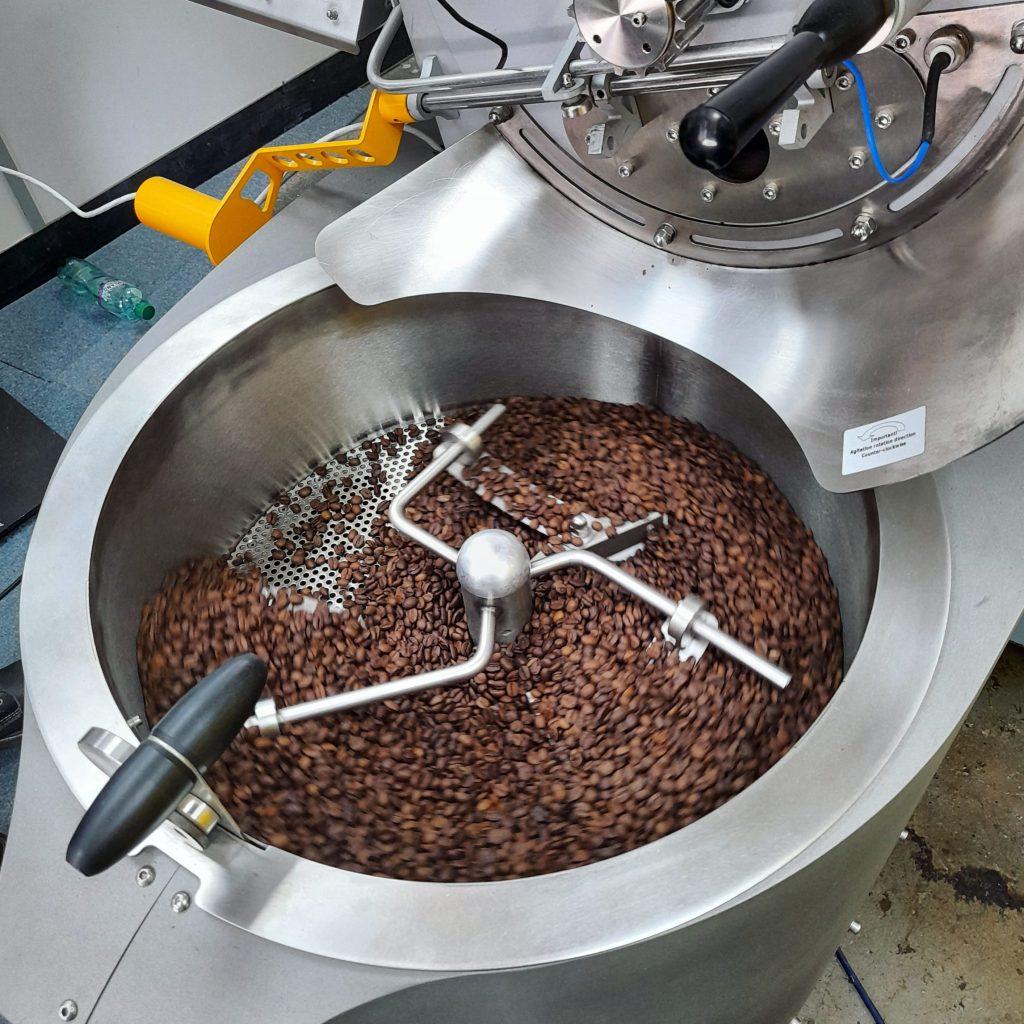 I briefly took a moment to think about the incredible journey these beans have taken to be here; nurtured and processed by farmers in Africa and South/ Central America, negotiated, traded, shipped and then roasted in Twyford, and then to end up in some Full of Beans Coffee Stout. Each pint really is a story in a glass.

As the roasting process continued, we could here a gentle crackling from inside the drum – this was the CO2 escaping from the beans as they neared completion. Shortly after, Yurtesh released the beans into the cooling tray, where they were spun gently around with a robotic paddle. This puts the brakes on the roasting, ensuring that the optimum point isn’t overshot.

Part of the reason for choosing a local roaster is the relationship we now have when it comes to developing the recipe. Yurtesh knows as much about coffee as we do about beer, and we’re lucky to be able to tap into that knowledge for the benefit of the final product. What excites Yurtesh, excites us too. 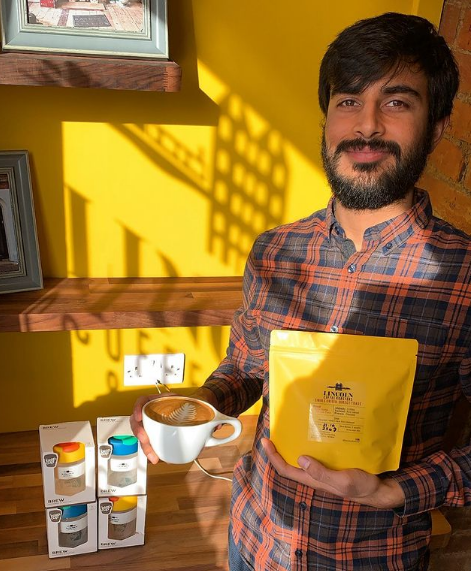 So when came the time to top up our stocks of Full of Beans again, we began talking about the latest coffees he had imported. Previous gyles (batches) of Full of Beans (598 & 617) have used a BrazilianMinas Geriassingle origin from Cachoeria Farm, and that imparted a rich, chocolate and nut component to the base beer.

When Honduras came up in the conversation, our interest was piqued. Yurtesh began describing a region known for producing coffees with a complex, fruity quality. The particular coffee he had in mind for the next Full of Beans brew was from from Copàn, West Honduras, on the border with Guatemala. This amazing region is best known for the Copàn Ruins – a vast array of surviving structures from the Mayan civilisation.

Grown at an altitude of over 1200m, this bean also goes through a staggering 90 hour maceration process, revealing a rich fig, orange marmalade and chocolate character. After tasting the coffee ourselves, we were sold. 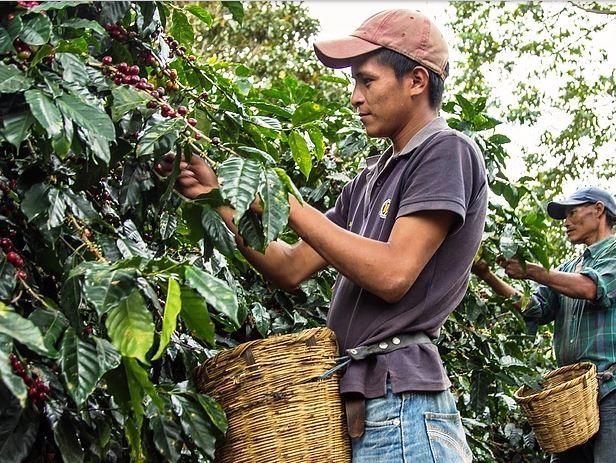 With such a special coffee variety coming into the recipe, it made sense to try and tune up our technique to get the best extraction from the beans. As mentioned in the previous Full of Beans post, we’re trying to mimic the cold press process but in beer – extracting just the top notes and flavour from the coffee without so many tannins, bitterness or acidic components.

This time we had the beans ground at the roastery (to achieve a more consistent grind size) and then immediately taken to the brewery for infusion. Timing was critical here; as soon as the beans are ground they begin to lose some of their flavour.

With any infusion in beer you’re playing with multiple variables; rate of extraction, temperature and of course, contact time with the ingredient. Seeking to maximise extraction and reduce contact time with the coffee, we employed our torpedo rather than a static soak as before, this time pumping the beer under pressure through a chamber of freshly roasted and ground coffee.

The results were almost immediate – within an hour we called time on the extraction, eliminating the risk of vegetal components that may come from over-exposure. The intoxicating aroma and flavour of single origin coffee was successfully captured in the beer. 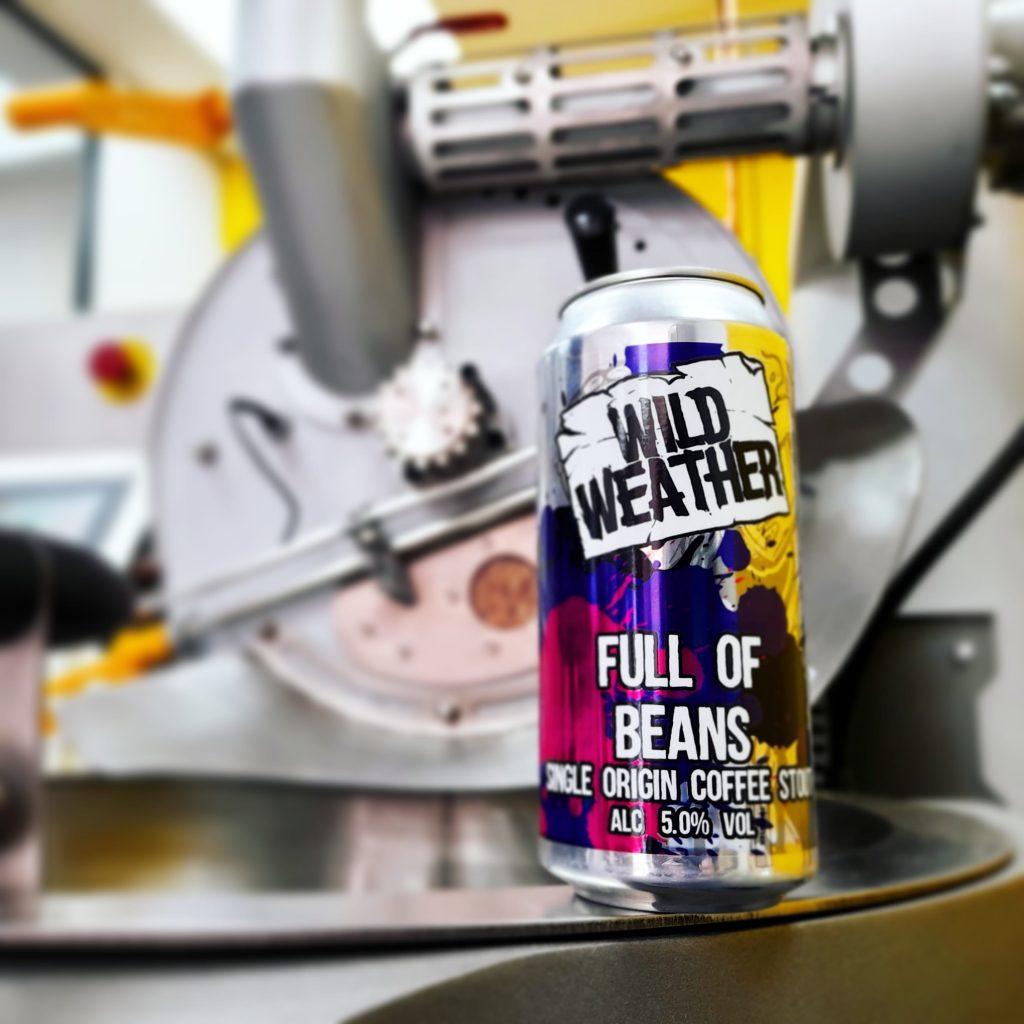 And there we have it: from bean to beer, all with a focus on maintaining freshness and flavour, with the added benefit of supporting a local business, and in turn looking after the producers with fair, direct trade.

We’d recommend you check out Lincoln Coffee House online at https://www.lincolncoffeehouse.co.uk/ . Not only do they boast some great sustainability credentials, but they make truly phenomenal coffee.

This new gyle (629) of Full of Beans is out now! To find out which gyle you have, look for the small, white rectangular box at the bottom of the can label, or ask the bartender if you happen to be drinking it on draught. Cheers!