You won’t find a beer like this anywhere else in the world.

Strangers When We Meet is a Gose (lightly salted, sour wheat beer style from Leipzig, Germany) infused with intense citrus from Bangladeshi Jara Lemons and the robust minerality of sea salt, all the way from the Isles of Scilly: Two ingredients that certainly were strangers when they met, but pair together in perfect harmony.

The resulting beer has a bright and slightly dry, citric acidity; is almost sherbert-like; and is balanced by a modest saline finish. The sweet and pungent aroma of exotic Jara Lemon rises from a base beer built from more than 60% Wheat Malt. 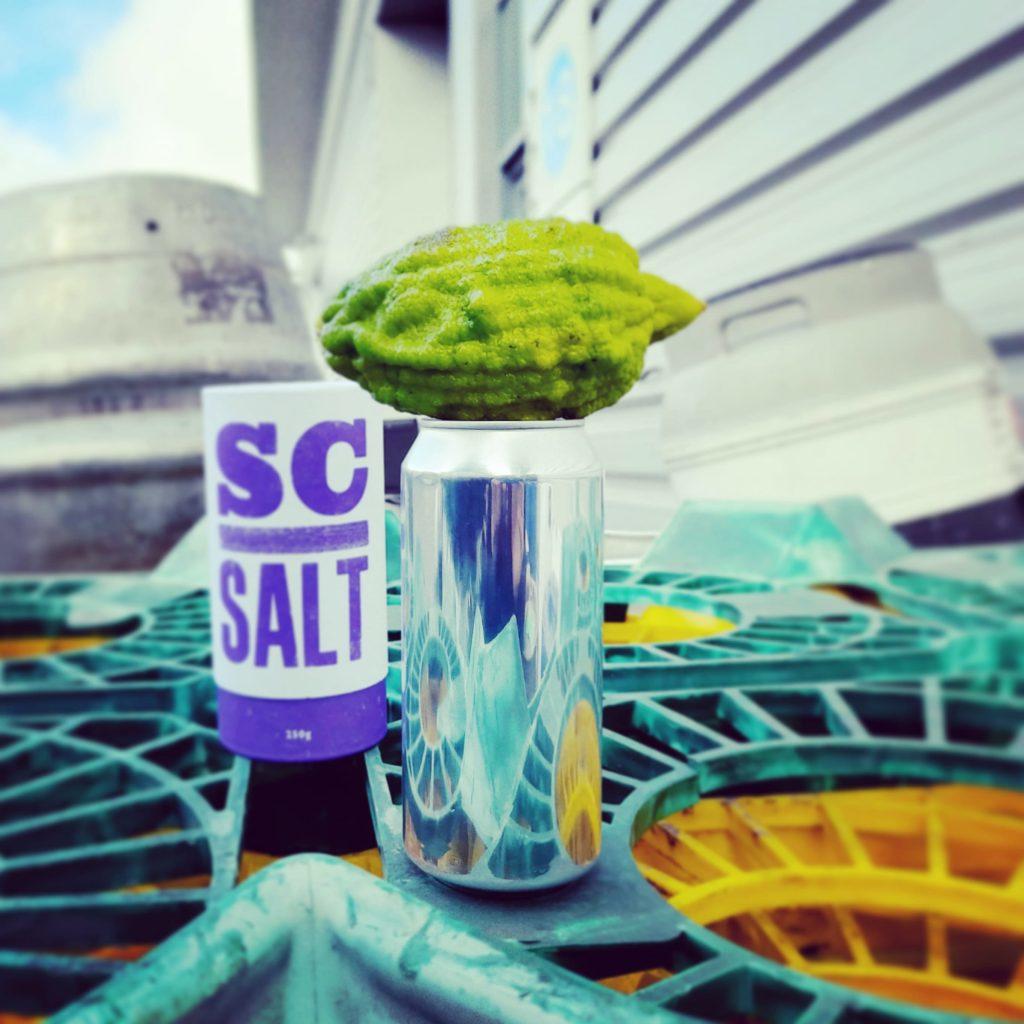 Ok, ok – let’s address the green, knobbly elephant in the room: What is a Jara Lemon? Known throughout East Asia as “Jara lebu”, “Jara lemon”, “hatkora”, “sat kara” or “shatkora” (Bengali: সাতকরা ), this is not the kind of fruit you expect to pick off the shelf in the UK. The ‘J’ in ‘Jara’ is a soft one, and is pronounced like the ‘-g-‘ in ‘Mirage’.

First of all, it is grown in Bangladesh and the Assam regions of India, and is one of those odd citrus grown primarily for the intensity of the oil in the rind (much like the bergamot orange), rather than the edibility of the flesh. The pulp on the inside is fibrous and dry, with very acidic juice.

The aroma of freshly cut or zested Jara Lemon is so powerful, that a single lemon cut in half can be used as an air freshener that lasts for days. In Bangladesh, the traditional use is in curry (adding a bright citrus component to a spicy sauce), but only very recently have the growers in Sylhet made the decision to increase the acreage and export to other countries, for other uses. 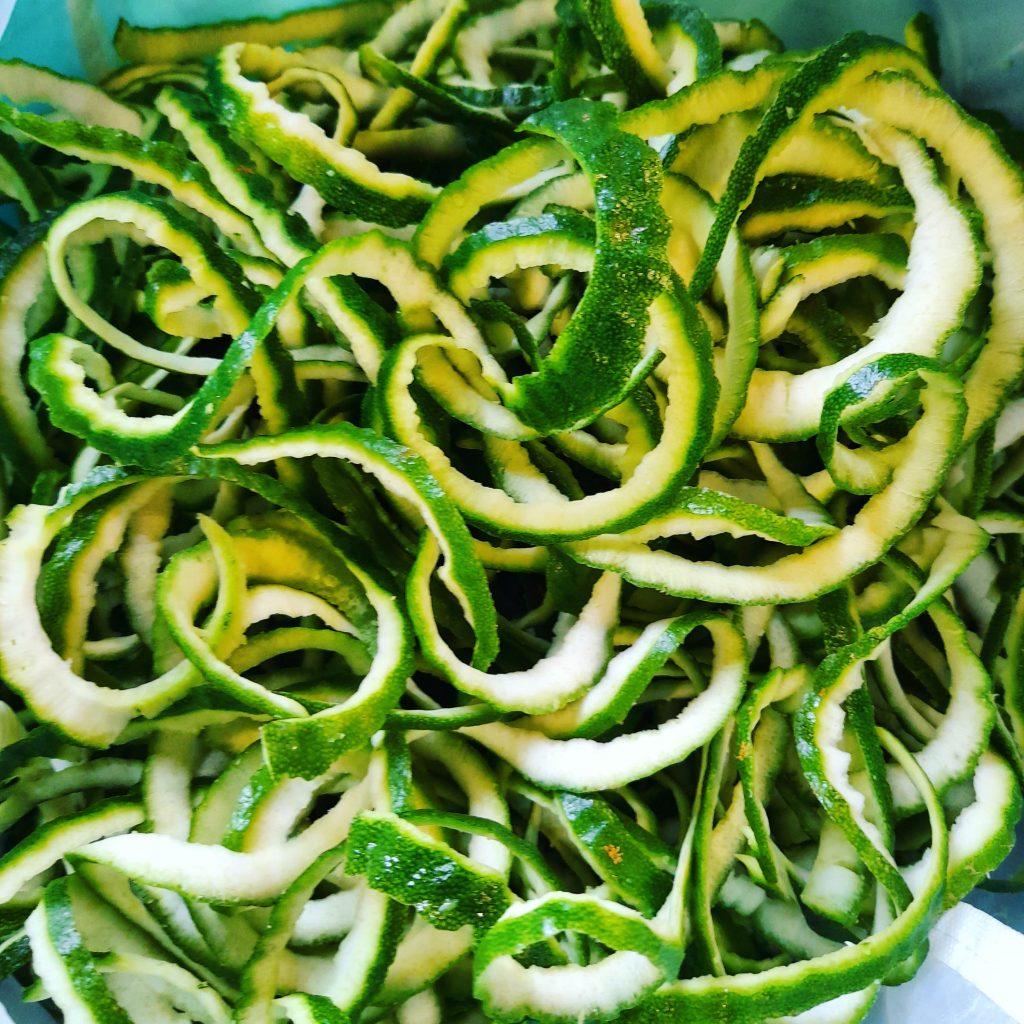 Sure, it’s called a ‘Jara Lemon‘, but not all is as it appears. The genetic history of the Jara Lemon is still unclear, and to be honest given the amount of uncontrolled cross breeding that happens in the wild, it may never be known. What we do know is that it is neither truly a lemon nor a lime. (For the taxonomists out there, it comes from the papeda species ‘c. latipes‘ rather than ‘c. micrantha‘… so definitely not a lemon!)

There is a divergence in the genetic history of the Jara Lemon (a long time ago!) that makes it quite distinct from the common forms of citrus that we find in the West. In layman’s terms: it is an unidentified ‘mutt’ of the citrus family, with a distant and mixed heritage in the wild. The best guess is that it is probably a hybrid of the Citron, is likely closely related to the Makrut Lime, but also with some cross breeding from the Seville Orange (AKA ‘bitter orange’) mixed in at some stage.

Having just read this, you can see why, as brewers, our interest was well and truly piqued. When we first came across one of these amazing fruits a few years ago, there was probably only a handful being exported to the UK at absurdly high cost, so we quietly filed this idea away in our brains as a fun idea, but let’s be honest – a prohibitively expensive non-starter. 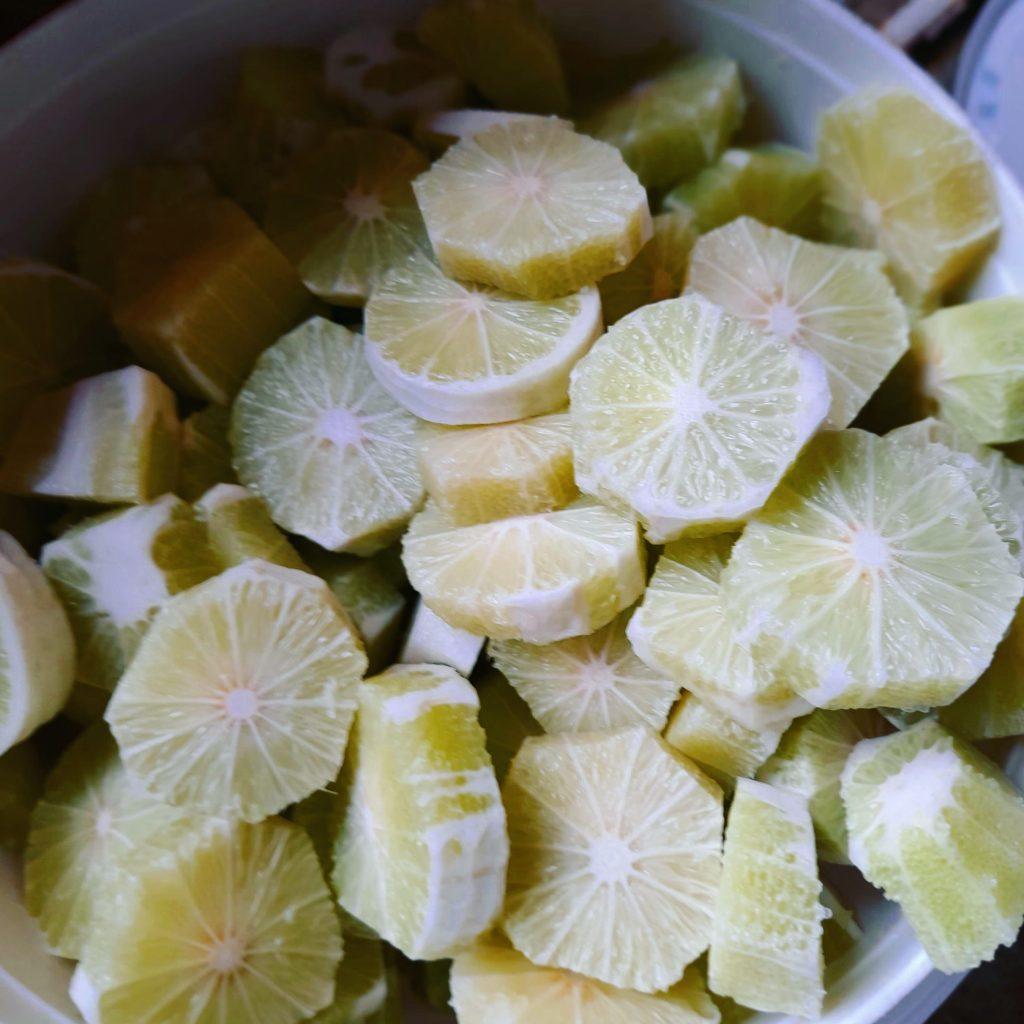 Nevertheless, at Wild Weather we’re having a big push on ingredient quality this year. After the success of Cephalopod (12% Heather Honey Imperial Stout), we’re feeling confident in moving ahead with more of these high risk, high reward ideas. Suddenly, this idea of a Jara Lemon and Sea Salt Gose was back on the table.

Due to their demand, scarcity and associated import costs, Jara Lemons are easily six times more expensive than a normal lemon. We had to really study the best practice for citrus infusion in beer, to ensure that if we pulled the trigger on the world’s first Jara Lemon beer, we could get the best out of these stunning fruits.

For Strangers When We Meet, the entire shipment of Jara Lemon had to be processed in-house in the days preceding the brew. Getting a good extraction was paramount, so after much searching (there are some utterly rubbish ones out there), a machine was sourced that allowed us to reliably strip the zest from each Jara Lemon.

This had to be done mechanically to make sure that we got a super consistent peel on each fruit – there were simply too many to do reliably by hand, and at such a cost, we couldn’t afford to get this bit wrong.

With a second and third pass, we were able to strip off the bitter pith and discard it too. Working with citrus in beer is terribly awkward – we want the outer peel and the inner fruit, but not the middle layer of spongy, white pith, which can add unwanted astringency. With Jara Lemons in particular, this layer was sometimes almost a centimetre thick. 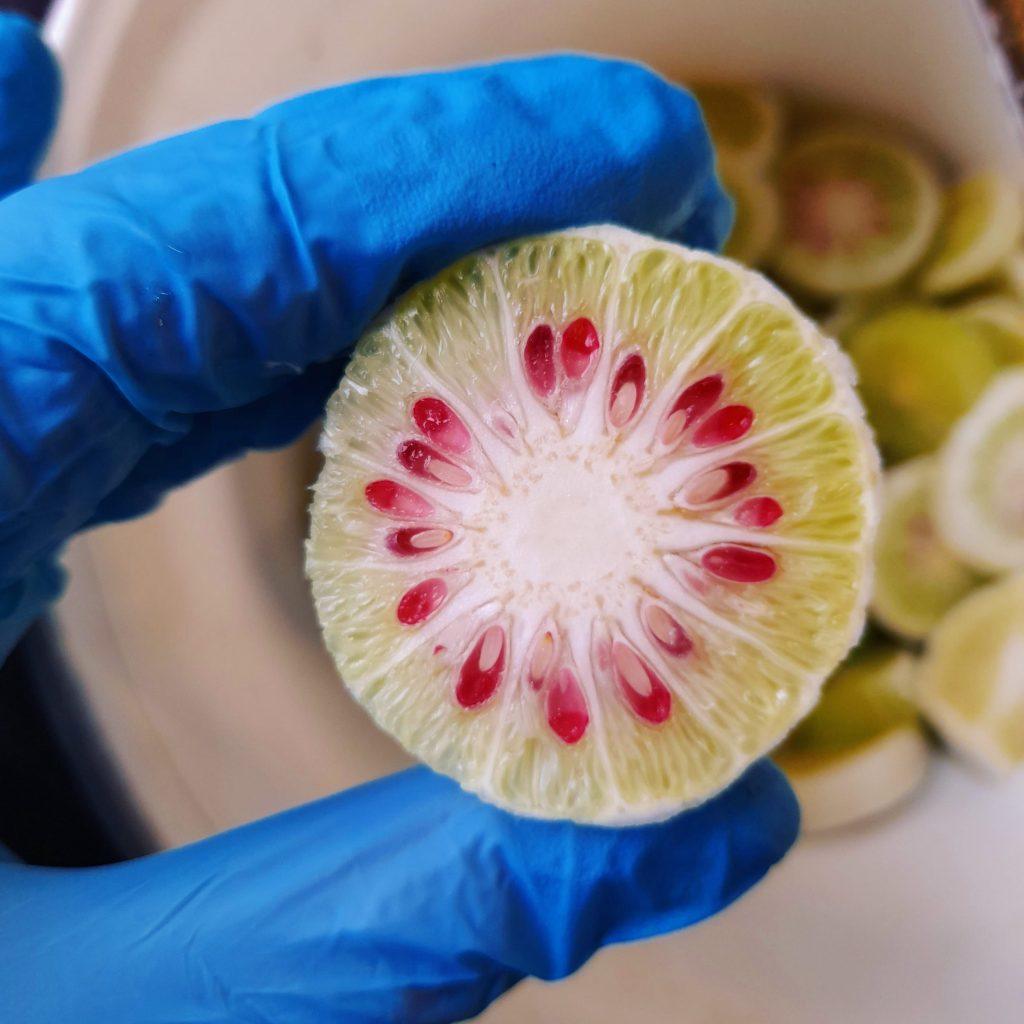 The massive pile of zest we amassed was simply a sensory overload. My glasses, gloves and clothes were sprayed with a fine mist of pungent Jara Lemon citrus oil to the point where I was a walking air freshener. I walked through the door at home that evening, and Emily said “Woah. You STINK of Jara Lemon“. I suppose it makes a change from the usual spent grain/ hops/ chemicals combo.

During this process we gained a real appreciation for quite how unique this fruit is. Physically, it’s dark green, often knobbly and mis-shapen, and hard as a rock when in this unripe state. Seriously, you could smash a window with one.

We agreed with our supplier that unripe was the way to go, as through the ripening process later in the year, the Jaras they import are yellow and sweeter, but less intense and therefore less suited to our purpose of producing a vibrant and citric Gose.

You may not believe it until you smell one yourself, but they also smell very strongly of orange and yellow fruit pastels – they have an intoxicating, sherbert-like quality that we haven’t come across in a citrus fruit before.

After processing, both the zest and the flesh were frozen for a few days before use in the beer. This bursts the cells, so upon thawing, all the goodness leaks out – especially important when dealing with such a tough and dry fruit. After the boil, the flesh was allowed to steep in the hot wort, leaching out a lot of acidity and flavour into the liquid before we’d even transferred to FV.

Post-fermentation, the zest was infused using our torpedo. With a mesh candle fitted into the chamber, we were able to recirculate the beer through the zest until we had extracted everything it was going to give. Whilst this was running, we added progressively smaller amounts of extra sea salt to balance the flavour. 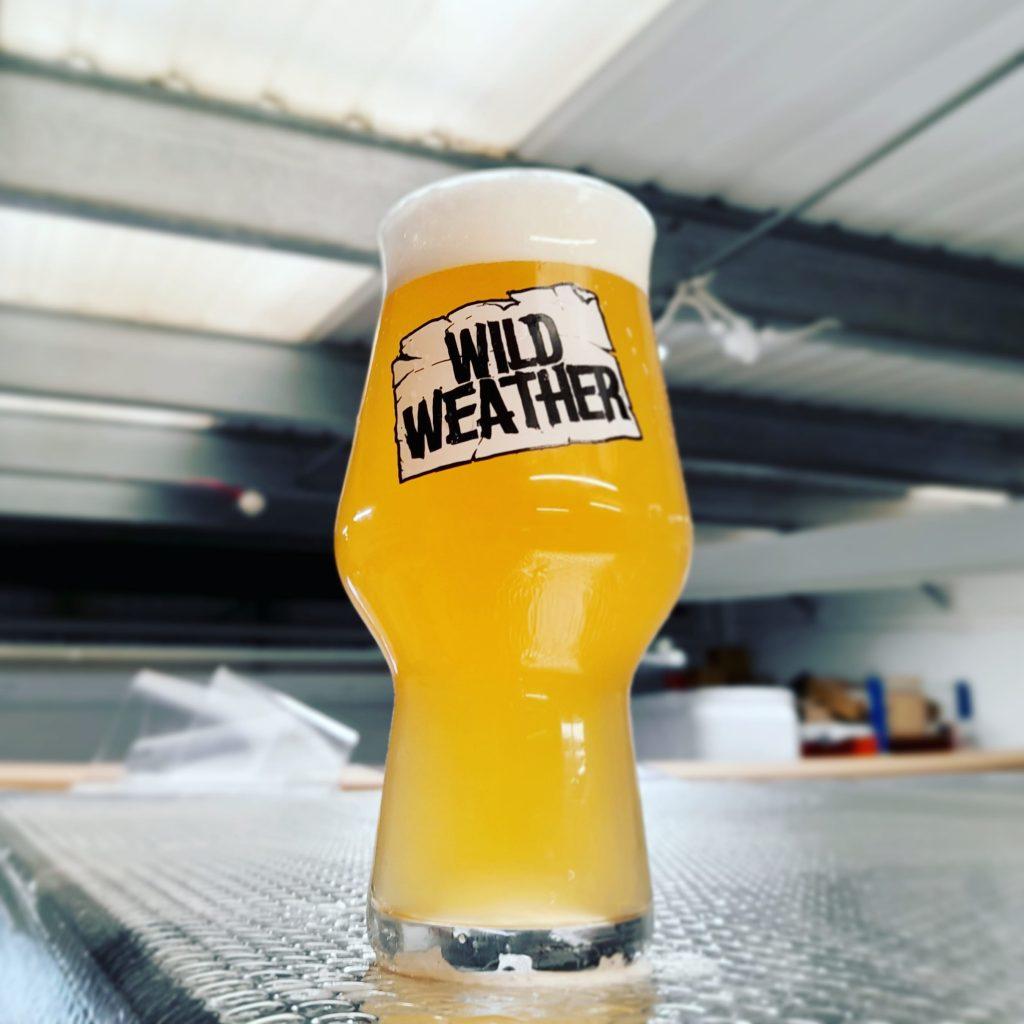 As far as Goses go… this is very non-standard. Usually, lactic acid bacteria is used to sour the beer, but due to the massive quantity of Jara Lemon flesh and zest used, the pH of the beer was dragged almost all the way to Gose-level sourness without the need to introduce anything else. All that was required was a small top-up of food-grade citric acid to tweak it just to the right level.

The beer is naturally sour all on it’s own, but draws it’s acidity predominantly from a rare and exotic citrus fruit, rather than the conventional lactobacillus kettle souring technique. The result is a Gose unlike any other; complex, but also clean.